The way I make my instruments involves the same mould technique that Antonio Stradivari was using himself (just a little bit modernized).
This means that using the same template you saw before, I built an internal mould around which the ribs will be steam bent and secured. To fix them to the mould, we use blocks (4 in the 4 corners and one at the top and the bottom). For these I use pine. These blocks are the depth of the ribs and then are shaped in the form of the corners.
When the rib structure is ready to be taken off the mould, the blocks stay with the ribs and are removed from the mould. They provide a gluing surface for the plates (front and back) as well as for the ribs. 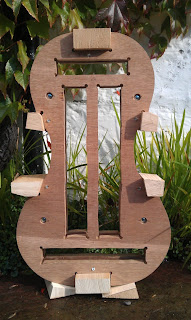 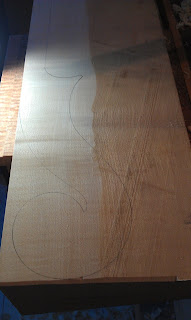 We also have to thickness the ribs. In order to keep them more stable while stored and seasoned, rib wood comes about 4 mm thick but are used at the thickness of 2 mm or less. This is a hard and painstaking job... That's why Douglas did it ! ;-) 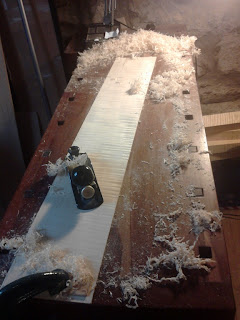 Posted by Marion Bennardo at 04:51 1 commentaire:

My first task was to choose the wood.
All my wood is of the highest quality, carefully selected and dried according strict rules of violin making. The seasoning starts with the sawmill : The selected wood is spotted in summer but cut in the beginning of the winter when the sap is at the lowest. Then it is chopped straight away and stored outside for a year. Then it is brought into warehouses when it is available for sale. I buy mine at that stage and carefully season it for another 4 years at least in my workshop. No fast process in high standard violin making - we make the way it was made when people had time.
The wood I selected for Victoria's cello is a piece of spruce cut in 2004 in the Italian Alps above 3000 feet for the soundboard (also called front). The back is a bit of sycamore cut in Yorkshire in 2002 (I have made all my cellos with this wood for backs, I love it and this is my last bit !). The neck is of English maple cut in 2005 and the ribs are of Romanian maple cut in 2006. When I will come to make the fingerboard, I will use the best Madagascar ebony...

Here is the back pieces and the neck and on the side we can see the template which is used in this case to check the sizes.

On the picture bellow are the front and the ribs bits.

How it all started...

On a clear morning of late summer, I was visited in my workshop by some representatives of the Dunedin School in Edinburgh and by Elizabeth Ballantyne Brown and her husband Dr Alan Brown. Also with them came retired cellist David Edward whose reputation has lasted well beyond the 20 odd years of his retirement. Sure this was arranged and I was waiting for them along with my friend Stephen Adams, cellist of the Scottish Opera who himself owns one of my cellos.
Elizabeth was the godmother of a young very talented musician - she played sax and flute - whose name was Victoria Herrald. In 2007, this young lady was to know a tragic end with cancer despite her youth.
4 years later, at the request of Victoria's mum, Elizabeth set herself to raise funds in order to commission a high standard cello in the memory of Victoria and that cello would be used both to raise founds for musical education within Dunedin School and to be given on loan to a young talented cellist who otherwise couldn't afford such an instrument.
An incredible number of people gave founds generously into the project, especially Victoria close family.
Victoria's grandparents used to live in the building which now houses the Dunedin School, hence its involvement in the project.
I am very touched and very proud to be the one violin maker asked to make that cello. I was also asked to dedicate the instrument in the form of specific art used in violin making...
Posted by Marion Bennardo at 09:25 Aucun commentaire: